Invented luminaires to increase safety for runners and cyclists

The shoelaces are created by inserting small flea diodes (bipolar tubes) that glow and are activated by touching it.

The laces are powered by a small battery built into the shoe containing electronics linked to an on / off sensor. 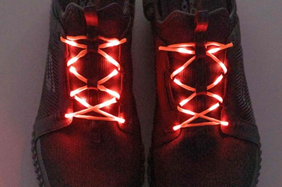 Textile specialists at Nottingham Trent University have designed laces that glow and flash to enhance nighttime safety for runners and cyclists. The invention was created by researchers in the Advanced Textile Research Group (ATRG) in collaboration with leading science and engineering company QinetiQ, shoe laces are also used as a fashion accessory.

ATRG says these braided shoelaces contain light-emitting diodes (LEDs) the size of "the size of a flea" that are turned on and off when touched by the user. Since the LEDs are encased in a waterproof plastic, the laces are as washable and hangable as any other shoelaces, the team added.

Professor Tilak Dias, the head of ATRG at the School of Art & Design, said: “These laces can improve visibility for runners or cyclists during dark winter nights. easily"

The potential future integration of other technologies into shoelaces really unlocks the huge influence of smart materials around the world.

"Not only that, but those who work with us in the industry believe they can become popular as a fashion accessory and used for both aesthetic and safety reasons." The laces are powered by a small battery built into the shoe that contains electronics linked to an on / off sensor. The electronics in the shoe are also wrapped in a silicon casing to protect them from impacts and incorporate them seamlessly into the shoe's design. According to the ATRG, before the LEDs were turned on, they looked like normal shoelaces, as the naked eye could not see the electronics and were almost imperceptible. "This technology shows that this product can improve safety for athletes, as well as be used as a fashion accessory," said Dr. Theodore Hughes-Riley of ATRG.

Roya Ashayer-Soltani - a materials scientist and textile specialist at QinetiQ said: “The current laces have the potential to make a big difference to the healthcare and sports industries, entertainment, defense and security. The integration of future potential technologies opens up a great influence of smart materials around the world.

NTU also earned the title Times Higher Education University in 2017 and The Times and Sunday Times Modern University of 2018. These awards recognize NTU for high student satisfaction, teaching quality, and engagement. with employers and all of the student experience.

The university has been ranked Gold in the category of Government Excellence in Teaching - the highest available. It is one of the largest universities in the UK. With nearly 32,000 students and more than 4,000 employees across four campuses, the university contributes £ 900 million to the UK economy each year. With an international student population of more than 3,000 from approximately 100 countries, the University prides itself on its global outlook.

The university focuses on creating opportunities and its broad outreach program is designed to enable NTU to become a social media. NTU is among the UK's top 5 employers for underprivileged students and was awarded the University of the Year in the UK Social Mobility Awards 2019.

A total of 82% of its graduates have jobs or receive postgraduate training within 6 months of graduation. High student satisfaction: NTU scored 87% of the satisfaction score on the 2020 National Student Survey, above the industry average of 83%