By the end of 2021, the total import-export turnover reached a record of $668.5 billion, up nearly 23% over the previous year, putting Vietnam in the top 20 economies in terms of international trade.

Sharing at the conference to summarize the work in 2021 and deploy the tasks in 2022 for the Industry and Trade sector on the morning of January 9, Minister of Industry and Trade Nguyen Hong Dien said that 2021 is a year with many difficulties and challenges; especially the severe, unprecedented impact caused by the COVID-19 pandemic. Together with the whole country, the Industry and Trade industry has been active, proactive and creative in implementing tasks and solutions to support and help businesses in production and business, ensuring circulation and timely supply. essential goods, boosting import and export.

“Export and import reached a record of nearly 670 billion USD, an increase of nearly 23% compared to the previous year, becoming the bright spot of the economy and putting Vietnam in the group of 20 leading economies in terms of international trade; in which exports had a spectacular breakthrough, increasing by over 19% (exceeding 15% of the plan), maintaining the trade surplus for the 6th consecutive year with a surplus of over 4 billion USD", Minister Nguyen Hong Dien emphasized. 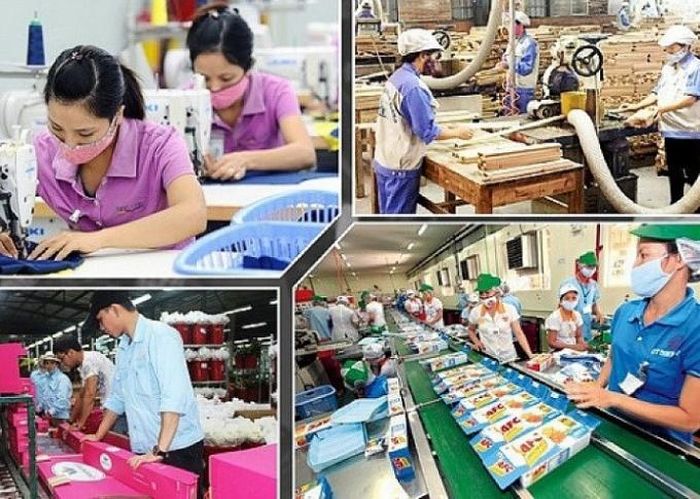 By the end of 2021, the total import and export turnover reached a record of 668.5 billion USD, up nearly 23% compared to the previous year. (Illustration)

The items that make great contributions to the growth of export turnover are phones of all kinds and components; other machinery, equipment, tools and spare parts; steels. In particular, textiles and apparel and footwear are two commodity groups heavily affected by the Covid-19 epidemic in 2020 that have recovered, with an estimated turnover of 32.74 billion USD and 17.65 billion USD, estimated increased by 9.8% and 4.9% respectively over the same period last year.

The export market has increased, not only in the traditional markets but also in exploiting new and potential markets and especially taking advantage of the new generation FTAs. Vietnam's exports have reached most of the world's markets, many products have gradually gained a firm foothold and improved their competitiveness in many markets with high quality requirements such as the EU. , Japan, USA, Australia...

In the opposite direction, along with promoting exports, in 2021 the Industry and Trade sector has continued to perform well in the import control stage. Import turnover of the whole year reached 332.25 billion USD, up 26.5% compared to 2020.

The report of the Ministry of Industry and Trade said that while most countries had negative growth or entered a recession due to the impact of the Covid-19 epidemic, Vietnam's economic growth increased by 2.58 in 2021. %, among the highest in the region and the world, is one of the few countries with positive growth in the Asia-Pacific region and one of the 16 most successful emerging economies in the context of the epidemic.

Industrial production scale continued to expand, IIP for the whole year 2021 increased by 4.8% compared to 2020. The industrial structure continued to change positively in accordance with the orientation of restructuring the industry, increasing the proportion. manufacturing industry, gradually reducing the mining industry and from labor-intensive industries to high-tech industries.

During the year, the processing and manufacturing industry continued to play a key role in leading the growth of the economy with an increase of 6.37%, contributing 1.61 percentage points to the GDP growth of the country.